This one turned out even more nonspectacular than I feared.

I decided to capture the March 20, 2015 solar eclipse in a simulated scanner photo. Without a good view to record, I hurriedly set up my computer, a Lenovo X220 paid for with Shuttleworth Foundation money, and the camera in a window at work, overlooking the street outside. At 09:55, Swedish time, a two hour recording session began. I'd neglected one crucial thing, though: The Logitech C920 I used has automatic exposure compensation, which I didn't turn off. That's called a fail.

My two hour video turned out pretty decently exposure compensated by the camera, and the resulting photo showed signs of the eclipse, but in a way that largely reminds me of a Fresnel lens, intensity wise. 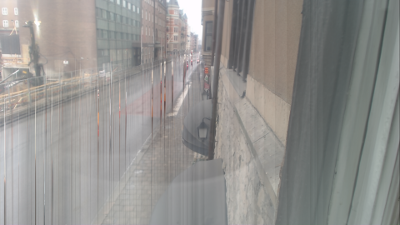 Not very dramatic. The real life experience was that of an overcast spring day rapidly turning into a soon-to-be thunderstormy spring day, but this was far from reflected in the image. I was going to leave the experiment in this state, and move on. But then, in what could be described as a kind of Tron moment (During the production of the 1982 movie Tron, there was a problem; If you realize that you've been using the stacks of boxes of photographic film sheets in the wrong order, and accidentally introduced quite notable jumps in the brightness in the final product, what are you going to do? Scrap the whole run, and order new stacks of boxes of photographic film sheets? That's expensive. Release the thing as it is? It doesn't look very good… And there's the Tron moment: The scene takes place inside a computer. Why not add some electrical sparks, flashes and anomalies that seem to cause the changes in brightness? Perfect!) I realized something:

In the camera's field of view, there's a really bright lamp, belonging to a building site, and pointing into the camera. That lamp and its flare is overexposed in bright sunlight, and, I reasoned, should become even more overexposed when the camera compensate for the lack of daylight during the eclipse.

After another two hours of video processing, I had a curve describing the number of overexposed pixels in that area. It looked like it could be used, and after some research on how much of the sun that was blocked (up to 82%), I fed the numbers and the image through some math. 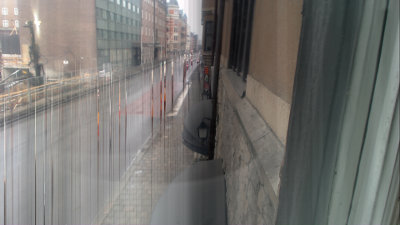 This experiment, although mostly a failure, gave me more insight in OpenCV, forced me to consider how data is structured in NumPy, and made me think outside the box. Not too bad for a largely failed experiment.