While developing and testing the avs6eyes Linux kernel driver, I needed to record long and short video clips for stability testing. One of those was captured using a camera aimed out from my window, registering the everyday activities outside my home. The result was pretty boring, and I thought it could be a fun exercise to spruce it up with the approximate equivalent of multiple virtual cameras doing overlapping time-lapse and long exposure photography at the same time.

With quite a few tricks, real nice pics 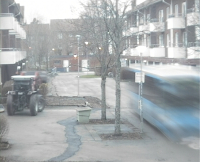 Simulated shutter time of about 1.2 seconds.

The long exposure bit was done by averaging several consecutive frames, simulating keeping the shutter open for an extended amount of time, and time-lapse was simulated by skipping in the stream. It worked out pretty well; the fast-paced, ghost-like appearance I was aiming for was, well, fast and ghostly.

But by now, you know me! There had to be more before I considered it done!

Inspired by something, quite probably related to the works of Michel Gondry, I wanted to insert multiple versions of myself in the video. Just having a bunch of me would be boring, and I thought up a pretty advanced choreography for myself, taking out the trash and dodging the imaginary vehicles and persons in the video. I thought it kind of amusing to think of what my neighbors would think I was doing out in the street, walking and jumping from point to point, tossing and handling a trash bag, but they didn't have to experience that. The weather conditions changed, work got in the way, I moved, and, basically, the taking out the trash part never did come to fruition.

The list of times and positions have been lost, but the initial video experiment has not.

I rarely ask people to contribute to my experiments. It's not that I don't think others could be of help, but rather that I don't want to waste other people's time on projects that just might could become something, but most likely are destined to become eternal darlings. This time, I asked my friend Martin Persson, good with sounds and related things, if he could make a soundtrack for me. He returned the video with an incomplete, but really nice, example of what he could make of it. I like what that annoyingly squeaky background loop does to the video.

A large portion of the time required for publishing this particular darling went into digging through all the places where my abandoned projects have been archived, but after extensive searching, I found the version with his soundtrack.

I've enhanced the contrast for increased viewing pleasure, and recompressed it from the source material with more modern techniques, but apart from that, the whole thing looks pretty much like it looked in 2006.